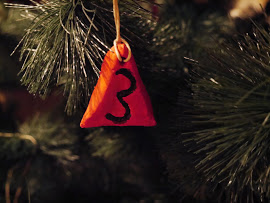 Triangulon can best be described as a huge, hovering red equilateral triangle of side 1 kilometre who flies or hovers at length around the Wicklow mountains, and upon whom is inscribed in giant letters "Three sides, three angles, one god". Despite this, he is often seen with simply a large number "3" on him, for simplification.

How Triangulon influences the universe is anyone's guess but his existence highlights points such as no matter what the triangle is, all the angles will add up to 180 degrees, which is useful in inspiring awe while using a triangular metaphor (such as describing where any three people live in relation to each other). Further to this is the point that any three distinct points always form a triangle, which is also an interesting fact.

Triangulon is by no means the god of maths. You cannot prove anything about a triangle.

Luckily for us, Triangulon doesn't care whether we can prove anything about him. Unstoppably and implicitly to the universe, he just is. No weapon can destroy Pythagoras' theorem, and no Dil or monarch can repeal it. That is perhaps the one vital clue to Triangulon's importance.

The Red Triangle Gang in Batman are a group of renegade circus performers who turn to a life of over-the-top crime.

The agni tatwa revered in Indian religions is a red triangle. It is seen as the unmanifested form having the qualities of fire, redness, triangularness, heat and anger. (The red triangle is the descending tongue of grace)

2 cannot be true, as this would create a contradixion. So 2 is false. If 1 were also false, then both would be false. However, this is impossible, as we have just said that 2 is false, i.e. it is not the case that both statements are false.