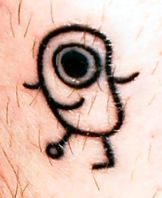 Secret: The World is Expecting Too Much

Thomas is one of The eight gods. He looks a bit like a peanut with legs and eyes. Probably his most important and recognisable feature is his circle foot. It is unknown whether this is a wheel or not.

He is three feet tall and has no shoulders or body, though he has a big head. (In this sense he is distinct from the Yonghy-Bonghy-Bo, whose head is larger than his body (though his hat is rather small). And yea, verily, indeedy, 'tis a greatmost blasphemie to confux the 'twain and he who doth bow down to ye Yonghy-Bonghy-Bo as a god, verily shall be smoted hardcore by the wrath of Thomas.)

Thomas the Walking Head is the most popular and sexy of the eight gods.

He was probably discovered by thousands of people throughout history. Children draw pictures of heads with legs and no bodies all the time. In that sense Thomas is an archetype and this might explain why people are so unsurprised by him. The popular movie star, toy and smuggler of ecstasy "Mr. Potato Head" is a similar idea but with feet and no legs, and implicitly variable facial features.

To some of us Thomas The Walking Head represents a very base form of experience. Sometimes you can get a sense of his consciousness so strong it is overpowering.

It is a fact of undisputed accuracy, but little consequence, that he is the god of (among other things) rickshaws and rocketbikes.

The Ultimate Comment will be the first great religion to consciously build its own gods. It's The Future, baby, and in the future everything is artificial, technological, designed. The eight gods are undeniably arbitrary, but then so are the gods of any polytheism. Since time began, Man has invented God and not th'other way 'round. People have prayed to ibis-headed men and gained real illumination. Our mission is to take childish doodles like Thomas The Walking Head and - by our divine power - elevate them to the status of deities. We do this to illustrate the arbitariness of the systems of concepts that are used in Science, Religion, Magick, Art and Society.

Thomas the Walking Head has many songs. Here's a few:

Eye of the Thomas

He's got one circle foot and one regular foot
He's got no shoulders but he still has arms
He's got really big eyes and he has a big head
He's only three feet tall-
Thomas the Walking Head.

(To the tune of "Lambert the Sheepish Lion")