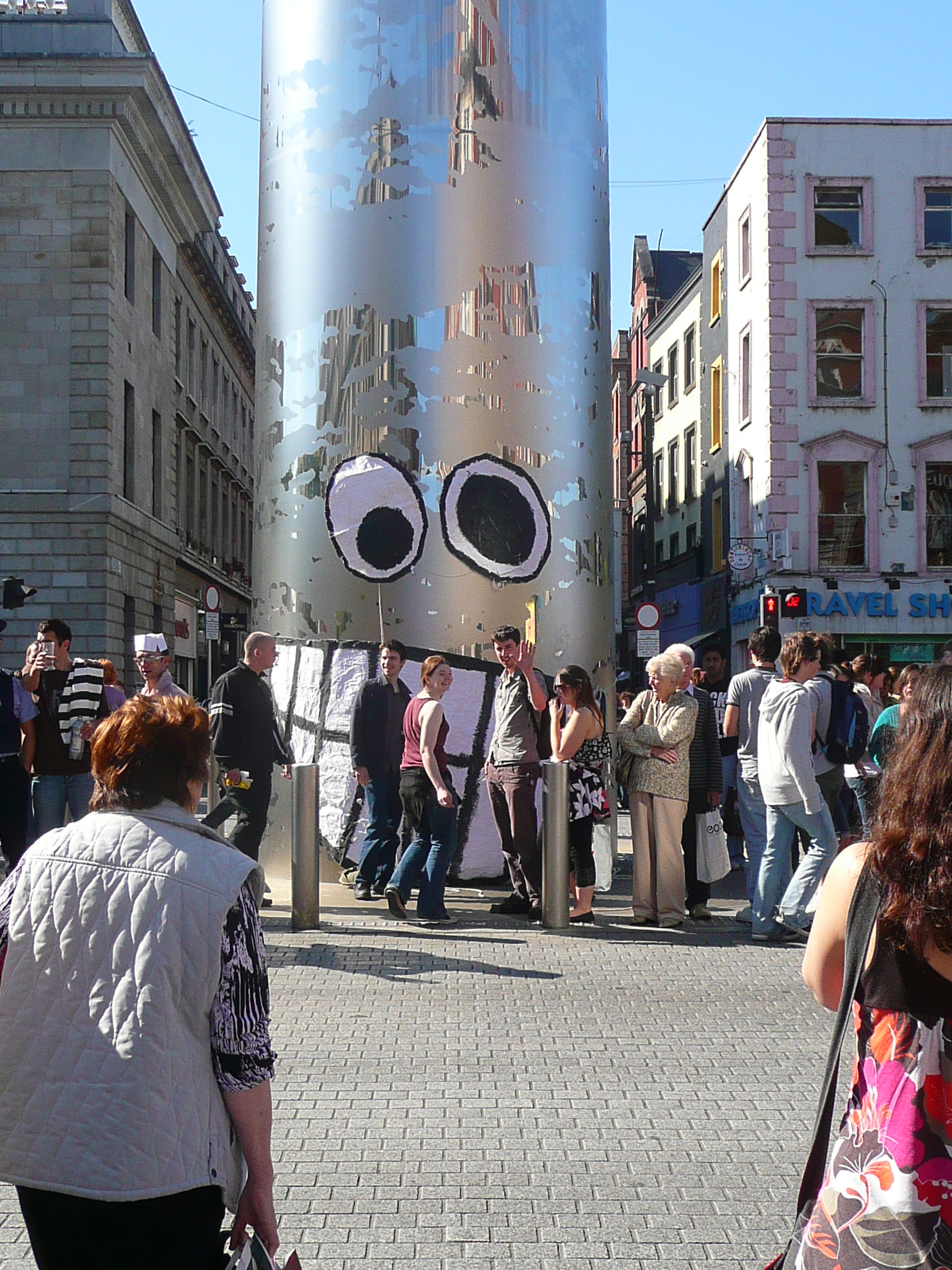 The Spire of Dublin

Secret: It's only my room if you're in it.

The Dimensional Transfunctioner, or Transfunctional Dimensioner also known as the Spire of Dublin (the official name being the Monument of Light) was the winning entry for a competition for the contract of replacing Nelsons Pillar. It is 120m tall and is largest sculpture in the world, at nearly twice the height of Liberty Hall. It takes the form of a large needle which is visible from all elevated locations in County Dublin.

The Ultimate Comment reveres the Spire as one of the eight gods and as a device used literally to access other dimensions. These dimensions are visible through the reflective parts of the Base Pattern.

Each reflective part is a window into another dimension and you could find out how many dimensions there are by counting the number of shiny patches in the Base Pattern. However, no one has done this because it would be boring and stupid.

O'Connell street and Henry Street are exactly the same in all realities, since they are visible upon looking into the reflection. However, anything out of eyeshot of the Spire (behind the Wall, or limit of perception) carries a probability of being a different universe. It would seem to be possible to climb through one of the "wormholes" in the Base Pattern, but the presence of ones reflective self on the other side prevents anyone from entering the transfunctioner.

Many cultures - from Egypt to India to Polynesia to Native Americans, Zulus and Siberians to the Celts to the Elves of Lothlorien - have used reflective substances as portals to other dimensions. Mirrors are pretty fucking weird things to begin with, that's for sure.

In that it forms a boundary to all realities, and that it appears identical from all realities, it is likely that the actual monument is a complex immense hypercone shape. Its actual height (found by multiplying base pattern estimates and the monuments one dimensional height) has been estimated at sixty kilometres.

Naturally this is representing its dimensions from a hyperspatial point of view three-dimensionally, and is thus an abstract figure but it may give some idea of scale.

Whether we are "inside the spire" or the spire is "inside our reality" is ambiguous and possibly irrelevant for three- or four- dimensional creatures such as ourselves.

The spire itself has attracted interest for tourists who view it either as either a folly or modern art, and its one of the few places in Dublin where youll find everyone constantly staring upwards. It was almost universally deplored as waste of public money or an eyesore by residents of south Dublin but is gaining a sort of ironic acceptance all across the city now, and some people are secretly proud of it. Even among the adherents of the Ultimate Comment there are those who would rather it had not been built, though they still recognise its awesome power.

It is also noteworthy that around Christmas time, most people will (knowingly or not) bring small models and effigies - which it must be noted still have considerable power - of the Transfunctioner into their home in the form of tall decorated conical trees ("Christmas trees").

The other end of the transfunctioner

It has been theorised that if the Transfunctioner was the length of the diameter of the Earth, and even if the top sways in the wind, the bottom must presumably correspond to a diametrically opposite point on the Earth's surface to where the head of the nail might go in.

That would be here.

Seems like it'd be a good place for it - out in the open sea, so the head would be underwater, and there's nobody around to see it get put in place except New Zealand, who don't seem to care about much of anything.

The Ultimate Comment, with its focus on consciousness rather than reality and with the absurdity of its beliefs, implicitly recognizes universal contingency. It's only my room if you're in it.

There is a principle in cybernetics called the law of requisite variety, which states that the system capable of the most variety will control other systems. In other words, with flexibility comes power. Act decisively, with a strong subjective reality and then pay acute attention to the feedback from the things you attempt and respond to it with flexibility and intelligence.

So believe in whatever works for you, then stop believing in it when the belief is no longer an asset. Try shamanism, try ritual magick, try dianetics, try hypnosis, try science, try metacommentology, try conformity, try iconoclasm, try psychedelia, try greed, try honesty, try game theory, try complexity theory, try meditation, try energy manipulation, try Thelema, try Qabalah, try business, try utilitarianism, try the dice, but never tie yourself into any perspective. To do so is to limit yourself psychically. Be limitless. Be spontaneous. Be a magician. Let variety be your habit, intermittency your routine, chance your guide and chaos your religion. "Do what thou wilt shall be the whole of the law."