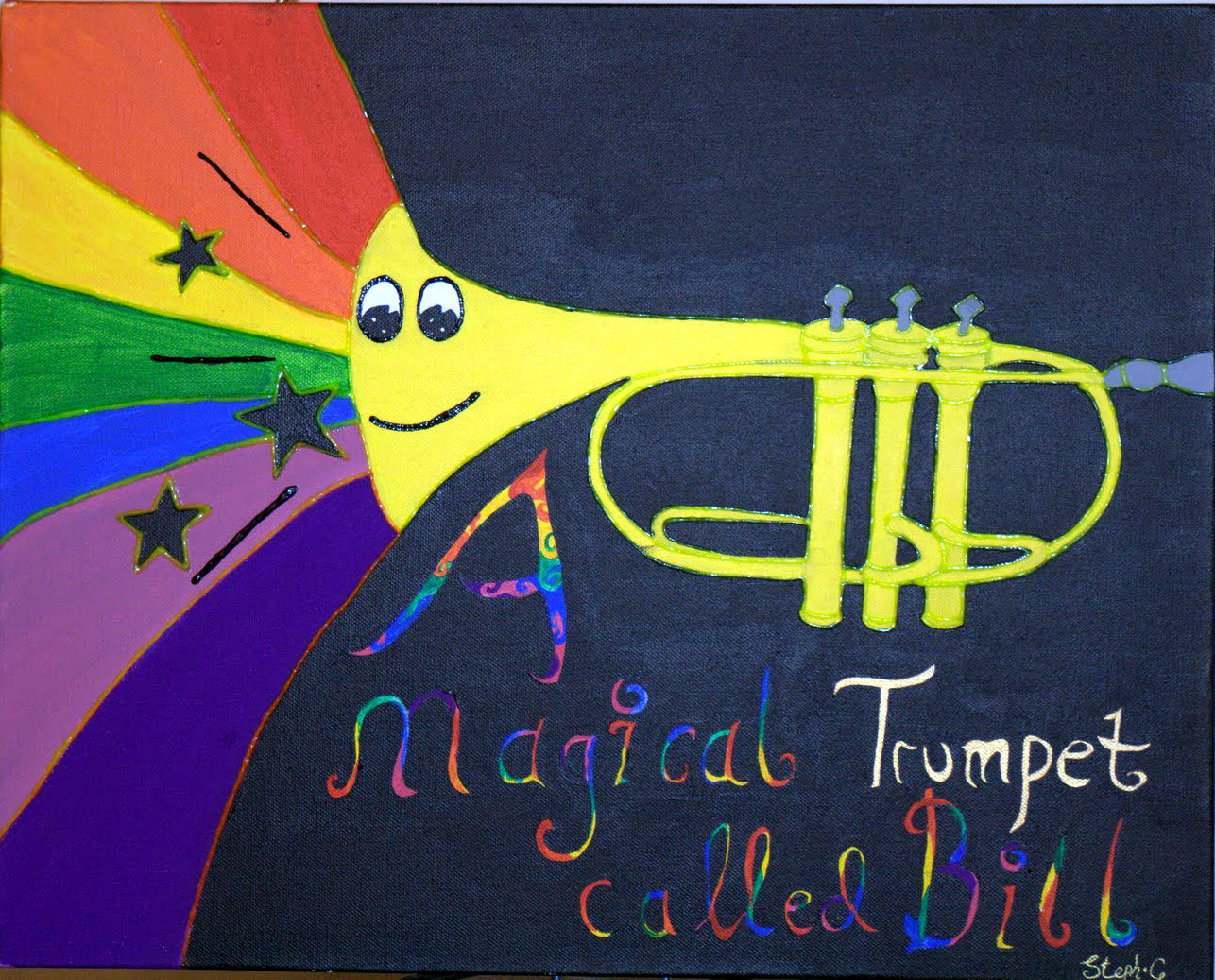 Secret: Laughing is always an option

A Magical Trumpet Called Bill was revealed by divine sources to be one of the divine archetypes of forces operating in the world.

He is usually pictured as a golden trumpet flying at high speed through various dimensions into different realities, some of which are insane.

A Magical Trumpet Called Bill's movement is usually signified by motion lines to his rear, and he always seems to have stuff shooting out his front portion, which is rarely discussed. The stuff has been theorised to be 'insanity'. It's always at the very least some stars or spirals and magic lines.

If A Magical Trumpet Called Bill manifested himself in real life he would be moving too fast for you to see.

However since spacetime is curved, you will see him over and over in the same place as he crosses the universe and ends up in the same space, in a sort of flickering line as on a television screen. Until May 2007, A Magical Trumpet Called Bill was believed to be a ridiculous god.

However, scientific discoveries disproved this.

Nada brahma! The universe is sound! In the beginning was the word! Sounds shapes the universe and A Magical Trumpet Called Bill is the cosmic trumpet that plays the sounds that form reality. "All music, based upon melody and rhythm, is the earthly representative of heavenly music." "There is music in the spacing of the spheres."

A Magical Trumpet Called Bill plays the music of the spheres, the mystical harmony.

Sciento-mysticism tells us that everything is harmonic vibration of matter. The music played by A Magical Trumpet Called Bill shapes the entire universe by cymatic resonance - or something. He who has ears to hear, let him hear!

(To the tune of: Jarabe Tapatío, AKA The Mexican Hat Dance)

Oh an instrument gilded and conic
Flying past us at speeds supersonic
Oh a mystical star-god of metal
A Magical Trumpet Called Bill.

His secret is alternatively written as "Laughter is always an option".

Its possible to get to a state of consciousness where you're laughing and every time they you think about it, you laugh harder.

The secret has a plain, literal meaning: when navigating the overlapping and underlapping corridors of consciousness, people sometimes get confused or anxious or paranoid. It's difficult to act resolutely in such a state, but at least you know that laughing is always an option.

Laughing is a mysterious and meaningful aspect of consciousness, a mysterious force that seems to rise up from your body to take over your mind. Sometimes you can have complete control over it, sometimes you have no control whatever, most of the time you have some control. It may be possible to cultivate control over this energy to reach normally unattainable states of bliss.

One metacommentologist pointed out that when you exaggerate something to an absurd level, that's funny. So maybe laughter is like an alarm that sounds to let you know you've gone way off the truth, and it points you back in the right direction. It's dharmatropic: it points you towards truth.

Laughter is a way orf disrespecting something, not taking it seriously. By laughing, we learn to take fewer and fewer things seriously. When you take nothing at all seriously, you will be completely enlightened. Laughter as dissolving illusion.

Another explanation is that laughter happens when we see through the illusion that words and symbols are reality. Jokes tend to use language to describe something that would be absurd if it existed in reality. So you see that words/symbols are not reality and enter the reality of A Magical Trumpet Called Bill, which is insane, hilarious and Absolute.

Schopenhauer, in The World as Will and Representation, writes, "the phenomenon of laughter always signifies the sudden apprehension of an incongruity between such a concept and the real object thought through it, and hence between what is abstract and perceptive." Exactly.

Take this joke from Alice In Wonderland for instance:

"The patriotic archbishop of Canterbury, found it advisable"

"Found what?" said the Duck.

"Found it," the Mouse replied rather crossly: "of course you know what 'it' means."

"I know what 'it' means well enough, when I find a thing" said the Duck: "it's generally a frog or a worm. The question is, what did the archbishop find?"

What makes this funny is that the same words ('found it') are used to describe two experiences that are not at all the same - the archbishop finding something to be adviable, and the duck finding a worm. We laugh because the difference between experiences and how we talk about them is exposed.

Ainm: Liam an Trumpa Draíochta
Rún: Is rogha i gconaí an gaire